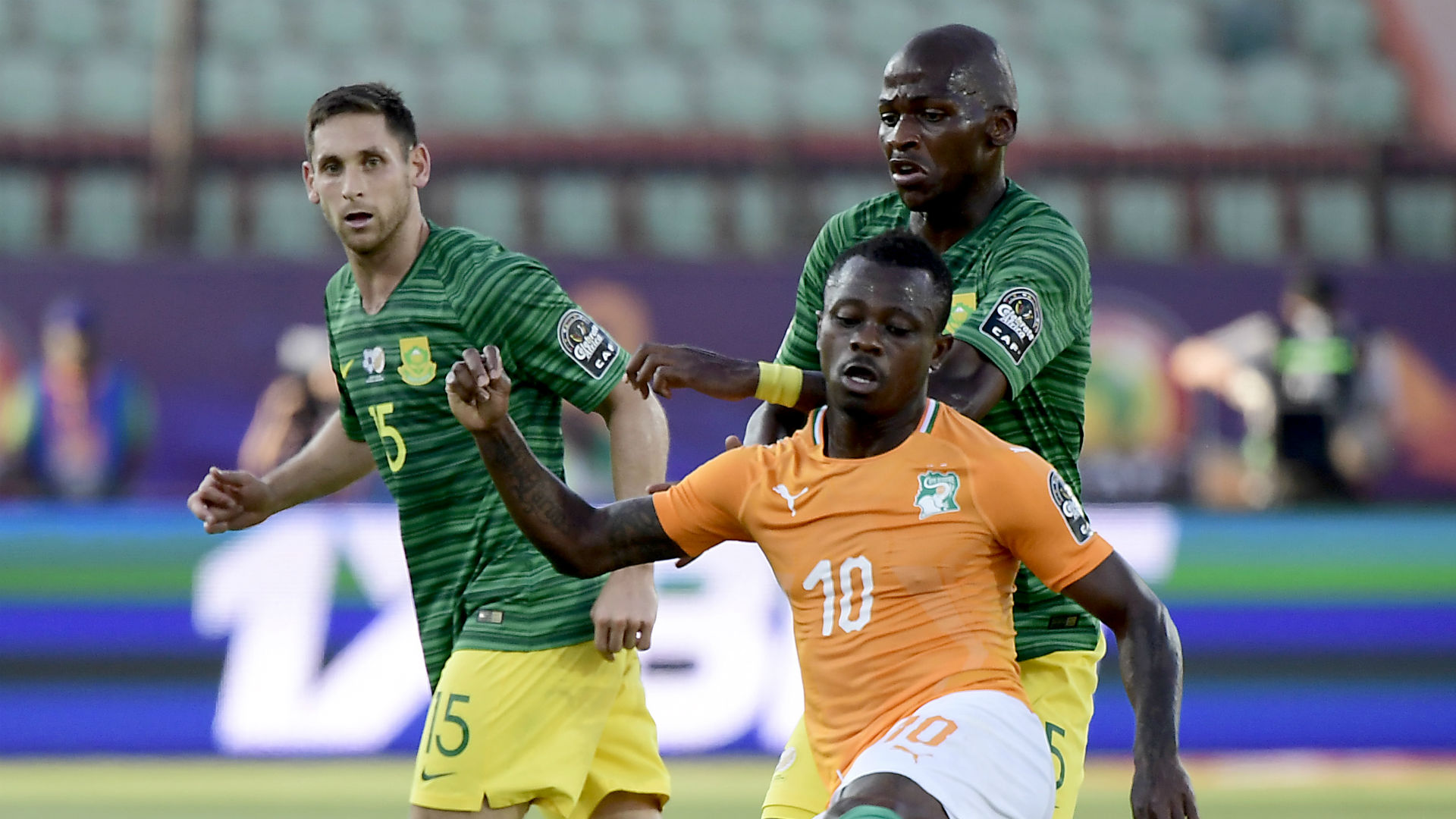 To kick off their 2019 AFCON campaign, South Africa took on traditional powerhouses Cote d’Ivoire in Cairo. Stuart Baxter’s charges lined up in a 4-4-2 shape with Percy Tau playing as a secondary striker/playmaker next to Racing Strasbourg’s Lebo Mothiba, who occupied a more traditional target striker role.

Cote d’Ivoire on the other hand lined up relatively similarly in a 4-2-3-1 formation with Aston Villa’s Jonathan Kodjia playing as a front-man with strong tendencies to drift to either wing, particularly in potential counterattacking moments. His movements would be balanced by Fulham FC’s Jean Michael Seri, whilst veteran Max Gardel and Nicolas Pepe provided the threat from out wide.

In the early parts of the encounter, either side looked to press their counterparts high up the field. Here South Africa would look to close down the opposition center backs with their two strikers. Behind that the midfield bank of 4 would start centrally, closing potential vertical ball progressions. They would leave the fullback open on either side, using the pass from center-back to fullback as a clear pressing trigger to advance and apply pressure. Behind the players pressing wide, the rest of the midfield would shift in a ball-oriented fashion, providing cover for any failed pressing attempts. Aiming to keep up the pressure and prevent flat ball progressions as much as possible.

Between the midfield and defensive line Serey Die would be left relatively unguarded, however due to his rather isolated position with several South African’s close enough to apply pressure, the Ivorians would rather not risk lost balls in central zones in their own half.

Within the high South African pressing Percy Tau played a particularly prominent role, cleverly using his cover shadow to guard the center initially. The to-be Premier League player also showed great intensity to still backwards press opposing left back Aurier, creating a 2v1 in favor of the pressing team on the left. Zwane’s timing in these actions was also on a high level, showing a strong anticipation of the pressing moments, as well as excellent timing, arriving just before Aurier could turn into an open position, all whilst not rushing in in such a way that he could be bypassed with simple body feints or touches.

The evident group tactical coherence of these moments can be further highlighted by the role of right midfielder Lebohang Maboe, who would pick up a very central position, significantly higher than his 2 central midfielders, from where he would aggressively look to sprint out and press any Ivorian switches from the fullback to far-side center back, keeping up the high potential collective pressure for longer phases.

Whilst the above individuals showed excellent activity and competence in the pressing, the collectivity thereof was certainly noteworthy. As soon as one South African player was beaten, the next would generally be there to apply pressure. It is unusual to see the high level of compactness coupled with intensive ball pressure, and good timing in the South African league. An aspect that must have clearly been worked on extensively in preparation for the tournament by the coaching staff. This made it very difficult for the West Africans to advance collectively up the field with flat combinations stemming from their own half.