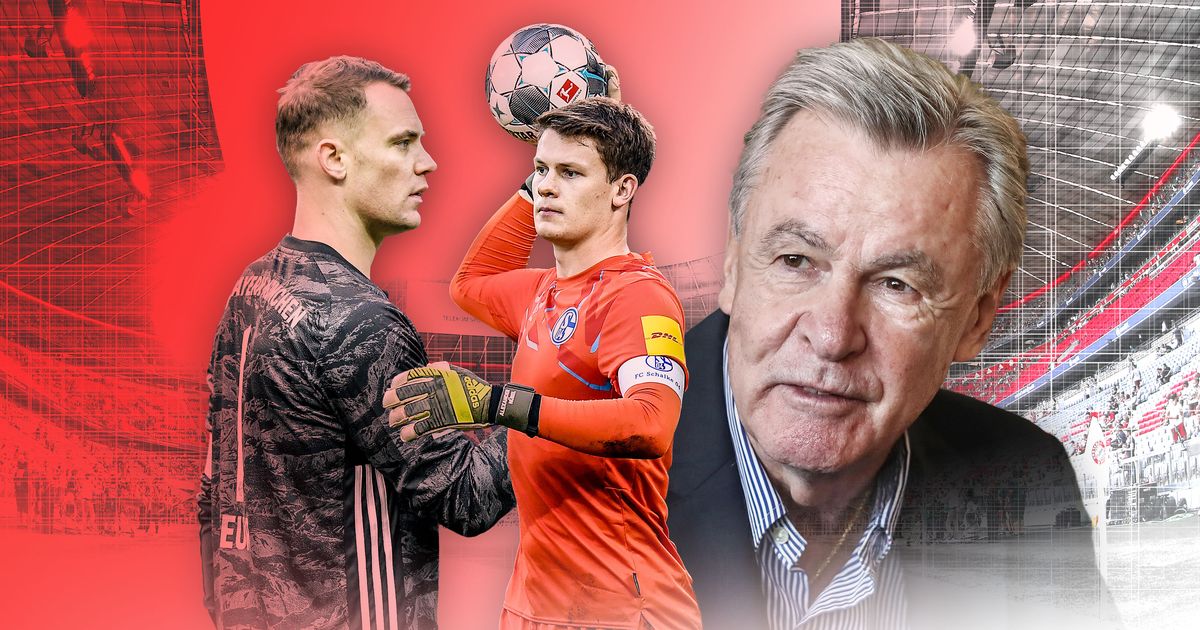 FC Bayern could be faced with an exciting contest in the goalkeeper position next season. In Alexander Nübel, they have signed an ambitious young goalkeeping talent, but Manuel Neuer certainly won’t give up his place as Bayern’s number one without a fight. However, one thing is certain: Nübel can still learn a lot from Neuer.

The similarities between both players are obvious. Both Neuer and Nübel had their breakthrough at Schalke 04 at a young age before making the move to Bayern in their mid-twenties. Moreover, both players are of approximately the same height and have a more than sufficient arm length and nimbleness of feet to make them appear like a giant many-limbed octopus on the line. Neuer has long perfected the way he uses his body to make it difficult for opposition forwards to score by narrowing the angle and making himself big. An advancing striker often feels as if Neuer’s body covers the entire face of the goal and leaves him with no spot to put the ball . Marco Reus, for example, has been frustrated many a time in their numerous duels by the long-standing German national keeper.

In many respects, Nübel is at the same level as Bayern’s incumbent number one. Like Neuer, he is a model athlete and has an even more powerful jump than his Bayern counterpart. It seems that Neuer’s athleticism has suffered a little bit over the years due to his many injuries and the physical wear of constantly playing at the highest level. However, he is able to compensate that with his remarkable positioning skills in the penalty area and on the line. Whereas Nübel often keeps out a ball with his cat-like reflexes in best David de Gea fashion, Neuer usually simply is in the right place at the right time so that he only has to extend an arm or leg to save a shot. Ultimately, both goalkeepers achieve the same result albeit by different means.

The stats for both goalkeepers for this season show this as well: Neuer hardly makes any mistakes in his positioning and intuitively knows where he has to stand to maximize his chances against shots from distance, crosses, or corner kicks. Nübel is almost on par with him in this regard.

Why is Neuer still the better keeper?

Nevertheless, as a complete goalkeeping package, Neuer is still superior to the soon-to-be pretender to his throne. Nübel’s considerable skills in the traditional areas of goalkeeping, which he undoubtedly has but is not yet consistently able to produce, will certainly have been a prime motive behind Bayern’s intention to sign him. Even though the first half of the season has shown that he is still susceptible to making mistakes, the 23-year-old has more than enough raw talent, athleticism and the lightning fast reflexes to grow into a virtually insurmountable shot stopper.

But goalkeeping at its core is mostly about being constantly on one’s guard and ready to muster up one’s full potential at any moment to stop a shot. Being constantly on one’s guard in this context means that one’s legs are always placed right, that one is always ready to jump, and that one is always able to move the hand towards the ball at the right angle and with the proper muscle tension to keep the ball out. All of this is a crucial part of what Nübel has to work on in the future. Because if he doesn’t excel in these areas, even a most promising goalkeeping talent like him will not turn into a goalkeeping giant like Neuer, who thanks to his almost unerring ability to make the right move at the right time has become such an awe-inspiring shot stopping machine over the course of his long career.